In the aftermath of the LAX shooting debacle, we now learn that screener Gerardo Hernandez lay bleeding to death for half an hour a mere 20 feet from an exit while emergency personnel waited for the area to be “cleared” by law enforcement:

An airport security officer lay helplessly bleeding after a gunman opened fire at Los Angeles International Airport as paramedics waited 150 yards away because police had not declared the terminal safe to enter, according to two law enforcement officials.  It would be 33 minutes before Transportation Security Administration Officer Gerardo Hernandez, who was about 20 feet from an exit, would be wheeled out by police to an ambulance, said the officials, who were briefed on the investigation and spoke on condition of anonymity because the probe was still ongoing into the Nov. 1 shooting.  For all but five of those minutes, there was no threat from the suspected gunman — he had been shot and was in custody, they said.  (Fox News, LAX security officer bled for 33 minutes as help stood by, report says, 15 Nov 2013).

We’ve also learned that the emergency response was delayed not only because all of the screeners at that checkpoint managed “understandably” to leave behind the phone that was to be used to communicate with the airports emergency call center, in fact none of them even bothered to press the “panic button” that would have summoned law enforcement immediately to the check point:

During his opening statement at a hearing about the Transportation Security Administration’s response to the attack, [House Homeland Security Chairman Mike] McCaul said nobody pressed a panic button at the screening checkpoint where the gunman first opened fire and that the phone TSA screeners were supposed to use to contact police was “understandably” left behind during the evacuation because it is a landline. (Reason:  House Homeland Security Chairman Says TSA Didn’t Alert Law Enforcement of LAX Shooter, 14 Nov 2013)

Truth be told — and in spite of TSA’s incessant claims that they are staffed in part with lots of seasoned veterans and former law enforcement officers — the screeners were scampering from the front lines of the War on Terrorism right out of LAX right along with the passengers.  In the screen snags below from a cell-phone video (courtesy TMZ), you can even see one of TSA’s finest apparently pushing a woman out of his way in his valiant rush to safety: 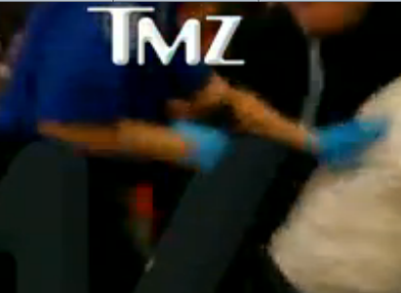 It’s high time for TSA to quit pretending that their screeners are pseudo law-enforcement officers on the front lines of the global war on terrorism.  Get rid of their fake police shirts and tin badges, and quit trying to pass them off as “officers”.  Then they can run from danger right along with the rest of us.